Posted on January 8, 2011 by Richard Millwood

As each new year comes around there are reasons to be dejected about our campaign but also glimmers of hope that lead us to believe that we can achieve our ultimate aim of a world free from nuclear weapons. More than ever before our specific objective within CND – that Britain should unilaterally disarm itself of all nuclear weapons – has to be seen in the broader international context, where North Korea is threatening its southern neighbour with a nuclear attack, where an increasingly unstable Pakistan could end up being, at least partly, controlled by Taliban forces who might end up with access to its nuclear arsenal and where there are fears, unfounded or not, that Iran is developing a nuclear ‘deterrent’. Up to now the problem with dealing with such threats is that the so-called ‘good’ guys, namely the official nuclear states – USA, UK, France, Russia and China – have shown extreme reluctance to get rid of theirs, thus fuelling the idea that nuclear weapons are a deterrent. If we claim to need them for defence then every country can do the same..
However, just before the Christmas recess, President Obama finally achieved the first real success in his declared plan to rid the world of nuclear weapons when the US Senate ratified the agreement signed by him and President Medvedev in April 2010 by a two thirds majority. This new START treaty now commits the two countries to reduce their warheads by 30%.
Kate Hudson said: This is a significant advance for disarmament, enacting real reductions in the size of the nuclear forces deployed by the US and Russia. They both retain the ability to destroy all life on earth, but reducing the size of their deployed forces lessens the possibility of accidents or unauthorised launches on either side. 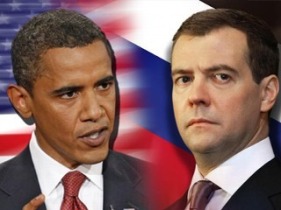 There had been months of uncertainty as to whether President Obama, having been wounded by the mid-term elections, was going to be able to get the Senate behind him in this vote.
Kate Hudson added: With this hurdle cleared, the US administration should seek to maximise the practical steps it can take immediately without any need for legislation, for example reducing the ‘alert state’ of their weapons systems as well as permanently disabling the thousands of retired warheads in their stockpiles.

Parallel to this, negotiations should commence on a treaty which would encompass all US and Russian nuclear weapons – including the smaller tactical weapons which are ignored in the new START agreement.
The Senate vote opens the space for further disarmament measures by the US, Russia and other states. This is clearly where Britain should be taking a lead and the decision not to renew Trident would demonstrate our real commitment to Obama’s goal of a nuclear free world. At the same time, however, we must not forget that the present war in Afghanistan is killing thousands of civilians, that under Obama the numbers of drone and other airborne attacks have increased and that ridding the world of the most deadly of weapons, on its own, is not going to stop that. Hard times are ahead. The campaign goes on.

2011 will be marked by the gradual effect of the cuts to the welfare and public service budgets being felt up and down the country. CND, as a single issue campaign, has no official line on these, but there is one cut we would support– to the budget for Trident renewal.. Locally, a group of trade unionists centred in and around Chelmsford has set up an anti-cuts campaigning group and Unison has produced an alternative budget which could help pay back the deficit to the tune of £74 billion in one year. These are some of the things which they suggest.
* Cancel Trident –
£1.8bn saved in one year
(£76 bn over 40 years)
* Introduce a 50% tax on
incomes over £100,000 –
£4.7 bn saved.
* Reform tax havens and residency rules to reduce tax avoidance by big corporations – £10 bn saved.
* Introduce a Major Financial Transactions Tax on UK financial institutions –
£30 bn saved
* Introduce an Empty Property Tax on vacant dwellings – this would also help to alleviate the housing shortage – £5 bn saved
* End the central government use of private consultants who bring little discernible benefit – £2.8 bn saved
* Replace PFI schemes, which cost money in user fees and interest charges with conventional public procurement – £3 bn saved.
These measures together with half a dozen others not detailed here would mean that the government did not have to make any cuts to the welfare or public services budget.
If you are interested in further information E-mail :
maljan9@gmail.com or ring 01245 601373.
There will be a benefit cabaret on 26th February starting at 7pm at Christ Church, New London Road, Chelmsford the Banner Theatre and the 1st May Band.

An impressive display of people power took place in Germany in early November when the 12th annual transport of highly radioactive material from La Hague (France) to storage at Gorleben (Germany). In Southern Germany a blockade by 1,500 – 2,000 protestors forced the train to change route. People dangling from bridges also impeded progress. As the train neared the terminus it was met by some 50,000 protestors. Despite the cold, 3,000 lay down on the track and 800 were arrested. The last 20km were by road where protestors parked tractors, dragged logs and herded flocks of sheep across the route. In total the transport, which without protests should take a matter of hours, took nearly 4 days – the longest journey time ever. The large numbers of German protestors can be accounted for by the German Government’s decision to repeal the law closing all 17 German nuclear plants by 2022 and instead extending their lives for up to 14 years.
Back here in the UK we have to witness Chris Huhne’s speedy back peddling on the issue of nuclear power. On his old (pre-Coalition) website he said:
The nuclear industry’s key skill over the past half century has not been generating electricity, but extracting lashings of taxpayers’ money.
From this, one might deduce that subsidies for nuclear power would be out of the question – and therefore that there could be no nuclear power stations as no corporation is prepared to underwrite the costs of insur- ing against a the effects of a nuclear accident, of decommis- sioning or of storage of waste. But no – if we pay attention to his weasel words of 16th December in the House of Commons, we hear this:
I could not be clearer than to say that there is no subsidy here which attaches to nuclear power. The subsidy attaches to low-carbon generation….. and the reality is that nuclear power is a low carbon energy source.
So that’s all right then. We can forget about the dangers of waste transport and storage, of accidents, of health risks – none of which apply to any of the other energy sources he is thinking of subsidising.

This entry was posted in Uncategorized. Bookmark the permalink.